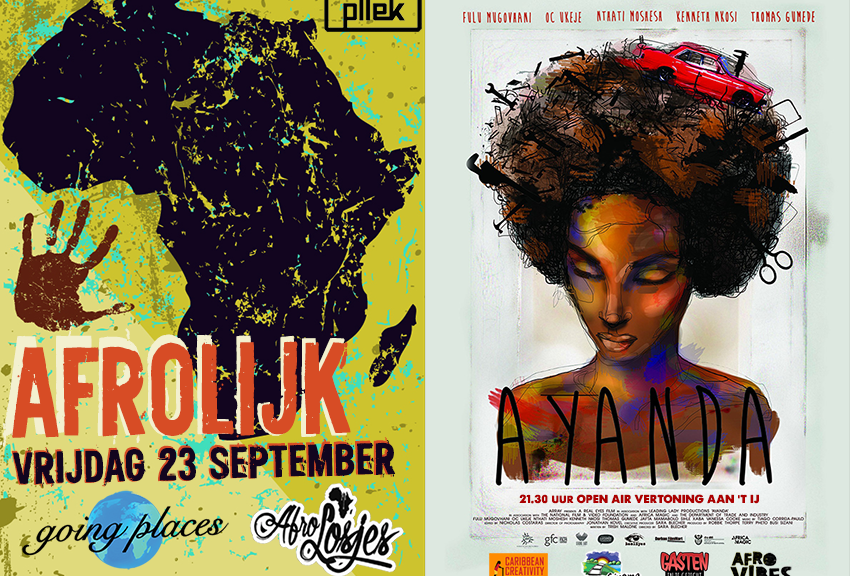 On Friday September 23th, the fourth and last edition this summer of Pllek Going Places, co-organized by Film Team member Emiel Martens, will take place at Amsterdam city beach Pllek. Under the title Afrolijk, meaning ‘AfroJoy’, the night will provide a full South African program. It will start with the open air screening of the South African film Ayanda (2015), after which the DJs of Rituals, the new branche of Afrolosjes, will take over the night with an Afro dance party. A performance by South African dancer Elvis Sibeko, art by photographer Alice de Kruijs and food by Broodje Met will make this last edition of Going Places complete. Afrolijk also marks the official launch of Afrovibes, the annual festival of modern theatre, dance and music from Africa that will be held next month in Amsterdam, Utrecht, Den Haag and Rotterdam.

From 21:00 hrs onwards you can enjoy delicious bites from Broodje Met and nice tunes from Pllek resident DJ Marcelo Umana. In the gallery of our restaurant we will also have to opening at 21.00 hrs of a cool expo on Africans in the Netherlands by photographer Alice de Kruijs. Do you want to have dinner in our restaurant before 21.00 hrs? In that case, reserve your table on time!

Just after sunset we will host screen Ayanda, an ultra-cool film about friendship, love and progress in contemporary South Africa. The 21-year old Afro-hipster and artist Ayanda (Fulu Mugovhani) is the daughter of a Nigerian father and a South African mother. After the death of her father she tries to preserve his dwindling auto repair shop. When her uncle announces that he wants to sell the garage, Ayanda sees the only tangible memory of her father fading. With the help of her friend David (OC Ukeje) she starts a new business to save the garage: refurbishing and then selling old vintage cars. The original and creative inventiveness evinced by Ayanda is an allegory for modern South Africa, a country in transition where communities are diverse, ideas fully flow and women have a voice. Ayanda, which received the Special Jury Prize at the prestigious Los Angeles Film Festival last year, is a unique coming-of-age film by director and producer Sara Blecher, who previously made Otelo Burning (2011), with which she already won 17 international awards.

Before the screening of the film, we will also show the brilliant South African short film The Blind Photographer (5 min, 2011) by director Carl Houston Mc Millan, named the Best South African Short Film of 2011.

After the film program we will continue in our cafe/restaurant, then functioning as a club, with a funky Afro night. First the South African choreographer and dancer Elvis Sibeko will perform a modern African dance, after which the DJs of Rituals will blow off the roof with a pumping mix of African rhythms, from afro house, dub and beats to baila funk, trap and grime. Rituals is a new branche of Afrolosjes, the popular Afro movement and clubbing night in Amsterdam (Air). For the people who are wondering what Africa sounds like, come to Rituals and be part of the journey.

Pllek is Going Places! This summer we, in collaboration with various partners, organize four nights on which we go on adventure to faraway countries, sunny spots and tropical regions. With the combination of film, food, art and music, we bring four continents for one night to Pllek. Going Places is a cultural trip to Amsterdam… and beyond the horizon. Travel with us, watch, taste, dance and celebrate the diversity of our planet!

Going Places #4 | Afrolijk is a collaboration between Pllek, Outdoor Cinema,  Caribbean Creativity, Afrolosjes, Afrovibes and Gasten in je Gezicht. The night marks the last edition of Going Places this summer, but the first edition of this new concept. Afrolijk, meaning ‘Afro Joy’, aims to become a new clubbing night with film, music, art and food for the African and Afro-minded community in Amsterdam and beyond. At the same time, this first edition of Afrolijk also serves as the official launch of Afrovibes, the annual festival of modern theatre, dance and music from Africa, this year held from October 5-15, 2016.